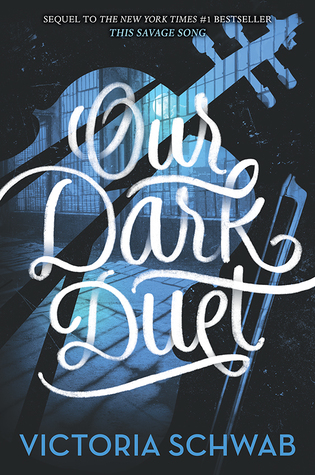 Oh my gosh this book killed me. I loved the first book and I can’t believe that this book was able to be just as amazing. I read this book in two days and it became one of those books that you just can’t stop reading. Every time I would put it down I wanted to start reading it again. It became an itch that I could only scratch by reading and I really loved that about this book.

The world is breaking. And so are they.

Kate Harker isn’t afraid of monsters. She hunts them. And she’s good at it.

August Flynn once yearned to be human. He has a part to play. And he will play it, no matter the cost.

The war has begun.

The monsters are winning.

Kate will have to return to Verity. August will have to let her back in. And a new monster is waiting—one that feeds on chaos and brings out its victims’ inner demons.

The characters in this book were ones that I had fallen in love throughout This Savage Song and so coming back to these people that I hadn’t read about in a while was amazing. To me, it was like hearing from a friend that you had fallen out of touch with. Kate and August are definitely memorable characters and I really love their dynamic together.

I love the fact that the new villains aren’t really all that new because they were either mentioned in the previous book or they stem from a loved character. Sloan is an evil dude but I like reading about him because he is a monster. He is made from evil so it only makes sense that he is in turn evil. He is written in such an amazing way because he is made to seem evil but not to the point where he is crazy. He knows what he wants and he knows just how to get it.

I do think that the side characters in this book were a little lacking in the character development department. To me, it just seemed like they weren’t important and because of that, I didn’t really care when someone would die or be put into danger. That being said, I did still enjoy hearing about what new people August became “friends” with while Kate was gone.

I would really recommend this duology to anyone who likes monsters and a fantasy world that doesn’t require a large amount of brain power to understand. I mean that in the way that there are no serious magic laws that the reader must understand before they understand the book. This book does have a large amount of violent killing, more than the first book so I will give that warning to anyone planning to read it. I’ve already recommended this book to multiple people and will probably continue to do so.